Mayor Massa`s years of service began as a Union leader for Public School Employees of Washington where he served as a Local President, on the State Board of Directors, as a Legislative Intern, on the Legislative Council, and as Chairman of the Member Benefits Committee. He was awarded PSE’s highest honor of Life Membership.He has served the City of Warden as a Council Person and now as Mayor for the last 8 years.Mayor Massa also serves as Chairman of the Grant County Board of Health, on the Grant County Strategic Infrastructure Committee and as President of Warden Lions Club. 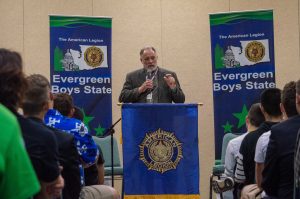 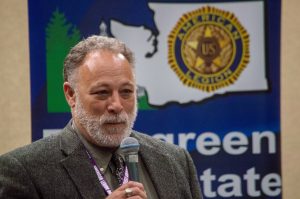 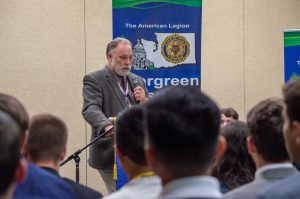 ”I was inspired by the way a mayor can care for his city.  I didn’t truly understand that a mayor is a public servant until Tony Massa’s speech. On a conscious level I understood it, but the point was really driven home when he said that all of his citizens were his boss, and when he was describing how he fought for his citizens.” Peyton Ninnemann, Hemlock

“Relationships and friendships are the most important. The fact that he raised 13 out of 20 million just from relationships he built in Olympia is amazing.” Pierce Higgins, Juniper

“I really liked how he talked about service leadership, because I think that is the most important aspect of leading a group. Overall, a really great speech and I enjoyed it very much.” Mason Haws, Oak.