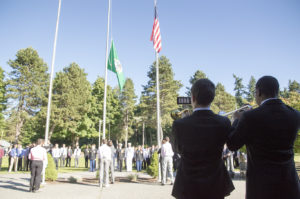 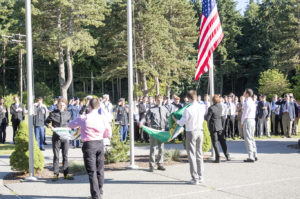 Every evening, the Flag Lowering ceremony was dedicated to the memory and service of one of our country’s lost or fallen servicemen or first responders.

This evening we dedicate Flag lowering to the memory and service of Captain Lance P. Sijan, U.S. Air Force.

On the night of November 9, 1967, Sijan was ejected from his crippled fighter aircraft over the steep mountains of Laos. Although critically injured and virtually without supplies, he evaded capture in savage terrain for six weeks. Finally caught and placed in a holding camp, he overpowered his guards and escaped, only to be captured again. He resisted his interrogators to the end, and he died two weeks later in Hanoi. His courage was an inspiration to other American prisoners of war, and he was posthumously awarded the Medal of Honor.

Rest in Peace, Captain Sijan, and thank you…

On the night of January 5th, 2016, an estimated 100 enemy fighters assaulted SFC McClintock’s outpost in Southern Afghanistan. Throughout the attack SFC McClintock exposed himself to enemy fire as he and his team defended their position and attempted to establish a landing zone for necessary air evacuation of causalities.

When extraction plans became unachievable, McClintock left the confines of the compound and the safety of his defended position to find and mark a secondary landing zone. Wounded in this attempt, McClintock succumbed to his wounds on a helicopter that evacuated him from the secondary landing zone he valiantly fought to establish. His actions were credited with saving the lives of those wounded in the initial assault and providing secondary assault forces to arrive in relief of those already engaged.

For these actions of selfless valor he was posthumously awarded the Silver Star.

Rest in Peace, SFC McClintock, and thank you…

This evening we dedicate Flag lowering to the memory of the seven sailors who lost their lives, when the USS Fitzgerald collided with a container ship off Japan on Saturday.

While the event is still under investigation, there is no question that these seven sailors represent the best of us.

They came from all walks of life – rich and poor, Americans by birth and immigrants – yet they answered the call of their nation. They volunteered to serve their nation in a time of war, knowing full well the dangers inherent to the profession of arms.

In the spirit of General George Patton, let us find it foolish and wrong to mourn the men who died. Let us, instead, give thanks that such men lived!
Tonight, we pay our respects, and thank the services of:

This evening we dedicate Flag lowering to the memory and service of Major James McGarvey and Captain James Carlton.

On April 17, 1967, Major McGarvey, a Marine A-6 Intruder Pilot and, Captain Carlton, the jet’s systems operator, were assigned a night bombing mission against a well-defended target in North Vietnam. During the attack run, McGarvey’s wingman reported seeing a brilliant orange flash mushrooming from McGarvey’s aircraft, after which no radio contact could be established with the aircraft. Search and rescue operations were initiated and lasted ten days, with no results. Both Marines were declared Missing in Action and to this day, no remains have been recovered.

As of today, there are 1,629 families who are still looking to find their loved ones who are listed as missing or unaccounted for from just the Vietnam War…

It is not just the Marine Corps; nor Vietnam. All branches of the military remember their fallen and missing. There are many Veterans standing here today with comrades still missing in action. They have not forgotten, and neither should you!

To Major McGarvey, and Captain Carlton, we thank you for your sacrifice. To all Prisoners of War and Missing in Action –
-YOU ARE NOT FORGOTTEN.

This evening we dedicate Flag lowering to the memory and service of Signalman First Class, Douglas Munro, U.S. Coast Guard.

First Class Munro was born in 1919, grew up in Cle Elum, Washington, and attended Central Washington College, before enlisting in the Coast Guard in 1939.

To this day, he is the only U.S. Coast Guardsman to receive the Medal of Honor. His citation reads:

For extraordinary heroism and conspicuous gallantry in action above and beyond the call of duty as Petty Officer in Charge of a group of 24 Higgins boats, engaged in the evacuation of a battalion of marines trapped by enemy Japanese forces at Point Cruz Guadalcanal, on 27 September 1942. After making preliminary plans for the evacuation of nearly 500 beleaguered marines, Munro, under constant strafing by enemy machineguns on the island, and at great risk of his life, daringly led 5 of his small craft toward the shore.

As he closed the beach, he signaled the others to land, and then in order to draw the enemy’s fire and protect the heavily loaded boats, he valiantly placed his craft with its 2 small guns as a shield between the beachhead and the Japanese. When the perilous task of evacuation was nearly completed, Munro was instantly killed by enemy fire, but his crew, 2 of whom were wounded, carried on until the last boat had loaded and cleared the beach. By his outstanding leadership, expert planning, and dauntless devotion to duty, he and his courageous comrades undoubtedly saved the lives of many who otherwise would have perished. He gallantly gave his life for his country.

Rest in Peace, Signalman First Class Munro, and thank you…

This evening we dedicate Flag lowering to the memory and service of Washington State Patrol Trooper Jim Saunders.

That night, Trooper Saunders conducted a traffic stop in Franklin County. He had radioed into dispatchers with a description of the pickup truck and the license plate. Within one minute of his initial call a private citizen used Trooper Saunders’ radio to notify dispatchers that the trooper had been shot, and the suspect had fled. Trooper Saunders was taken to a local hospital where he was pronounced dead from multiple gunshot wounds to the head and neck.

The suspect was arrested the following day after officers conducted surveillance on several different locations, looking for the owner of the truck. The man was convicted of first-degree murder and sentenced to life without parole.

Trooper Saunders is survived by his wife and two children. His youngest daughter will never know her father—Mrs. Saunders was pregnant during her husband’s murder.

Rest in Peace, Trooper Saunders, and thank you…