Hans Zeiger, Representative from the 25th Legislative District, spoke with the delegates of Evergreen Boys State Tuesday afternoon about Washington State government, balancing choices and what it is like to run for office at a young age. 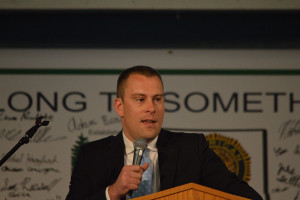 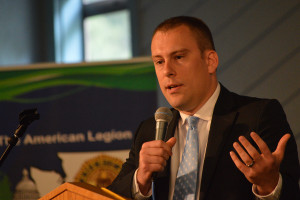 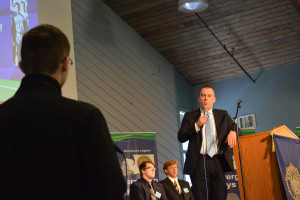 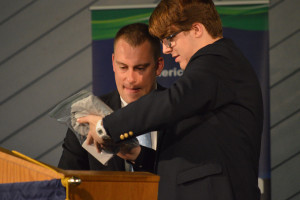 “I learned from Mr. Zeiger that working across party lines is often necessary for the success of the state.  Although it may be discouraged/uncommon, Mr. Zeiger is looking to encourage collaboration between both parties to pave the way for the future of not only the state, but the nation.”
-Luke Cantor,  City of Maple

“I learned about what congressional representatives are about, what they do, and why one should try to be one. I also learned about the key role fright trains play and how bills are made and passed.”
-Piljin Kwak, City of Elm

“Hans has always emphasized how much every vote counts as he beat out an incumbent of 9 years by just 26 votes. He is very against common-core in education and a “one-size fits all” concept, and is also against the massive amount of testing we as students do. Because of how trade-dependent the State of Washington is, Mr. Zeiger feels as if his most important project is to finish Hwy 516 because of how important it is for freeing up the flow of freight. He feels that encouraging bi-partisan-thinking is critical to the advancement of our government instead of how parties punish those that propose and declare such a way of thinking. He believes that lowering the cost of tuition is important and should be important to us.”
-J Rose III, City of Hemlock