Rep. Brad Klippert was born and raised in Sunnyside, Washington. He has served in the state House since 2008.

He is passionate about his faith, family, and his country and state.

Brad holds a master’s degree in Teaching from City University in Tacoma. He has taught at the elementary, middle, high school and college levels. He also holds a bachelor’s degrees from Northwest University in Kirkland in Behavioral Science and Biblical Studies.

As a 25-year county law enforcement officer, Brad has served communities in western and central Washington. He currently serves as a deputy sheriff with the Benton County Sheriff’s Office. He also works as a school resource officer and is dedicated to keeping students, faculty and the community safe during the academic school year. Before his time in central Washington, he worked as a deputy sheriff for the Pierce County Sheriff’s Office.

With over 30-years of military service, Brad has served as a helicopter pilot and holds the rank of commander in the Washington State Army National Guard. He has had the privilege of transporting a United States Vice President, and two Haitian presidents during his career.

Brad believes in balancing the state budget without raising taxes. He believes the key to getting Washington back on the road to economic recovery is to get government out of the way to allow people and businesses to grow and prosper. That means reducing unnecessary regulations and helping foster the full potential of businesses and individuals to be successful.

He has been recognized by several organizations for his service in the Legislature and community including The ARC of Washington state, the National Federation of Independent Business, the Association of Washington Business, and the Washington Food Industry Association. He received honors from the United States Army for military excellence and the Pierce County Sheriff’s Department for heroic efforts.

Brad and his wife, Kim, reside in Kennewick and have two daughters and a son. 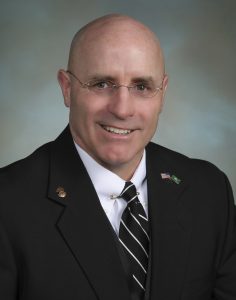 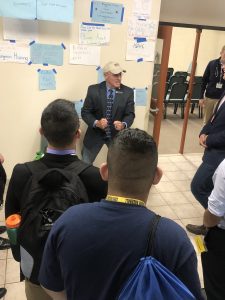 “Representative Klippert did a fantastic job at interacting with the audience. His passion for service was inspiring.” Grant Pickett, Hemlock

“The Honorable Brad Klippert inspired me to always push forward past challenges no matter the obstacle. His character and message helped me to overcome personal setbacks jand motivated me to be a better citizen.” John Pierre, Juniper

“I really appreciated the sentiment attached to the speech. One particular part being not confident in yourself. I really connected to this in my own life although my outward persona is confident. It showed me its okay to be insecure right now and I may learn to be not afraid as he said. I may one day be the great man he is today.” Colin Slattery, Oak