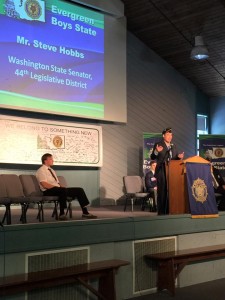 “What I learned from Mr. Steve Hobbs…”

“The most important thing that I learned from Senator Hobbs is that there is humanity is politics and higher office. Mr. Hobbs speech demonstrated that the people in power are down to Earth people like ourselves. I believe this aspect of presidential candidates has been lost in recent years as our two candidates are a billionaire businessman and a political machine.”
-Jack Kelly, City of Hemlock

“The biggest thing I saw was how laid back Senator Hobbs was able to act despite the responsibilities he has taken to represent the people of his area. He was a very good speaker and knew how to read a crowd.”
-Gannon Short, City of Hemlock